Atheists
Home›Atheists›“You are an atheist …”, the fundamentalists are indignant again against Javed Akhtar, the reason is only a “tweet”

“You are an atheist …”, the fundamentalists are indignant again against Javed Akhtar, the reason is only a “tweet”

Bombay: A statement by musician Javed Akhtar on the deteriorating situation in Afghanistan has placed him in the target of Islamic fundamentalists. Javed had written that every Muslim group should condemn the workers whom the mayor of Kabul has asked to “stay at home”. After the same tweet, the fundamentalists got agitated and called them infidels and atheists.

Aljazeera reported that the mayor of Kabul has ordered all working women to stay at home. I expect all major Muslim organizations to condemn it because it is done in the name of their religion. talaq

It will be recalled that Javed Akhtar wrote in a tweet: “Aljazeera reported that the mayor of Kabul has ordered all working women to stay at home. their religion Where are all those who cried until yesterday in defense of the triple talaq. ”

Ali Hashmi commented on Akhtar’s tweet and wrote: “What should you do by religion. You are an atheist, be careful. In Kabul, working women were banned for a short time and that too in some. regions. They are allowed to study, they are allowed to do medical work. I don’t support the Taliban, but I just want to clear up your misunderstanding. “ 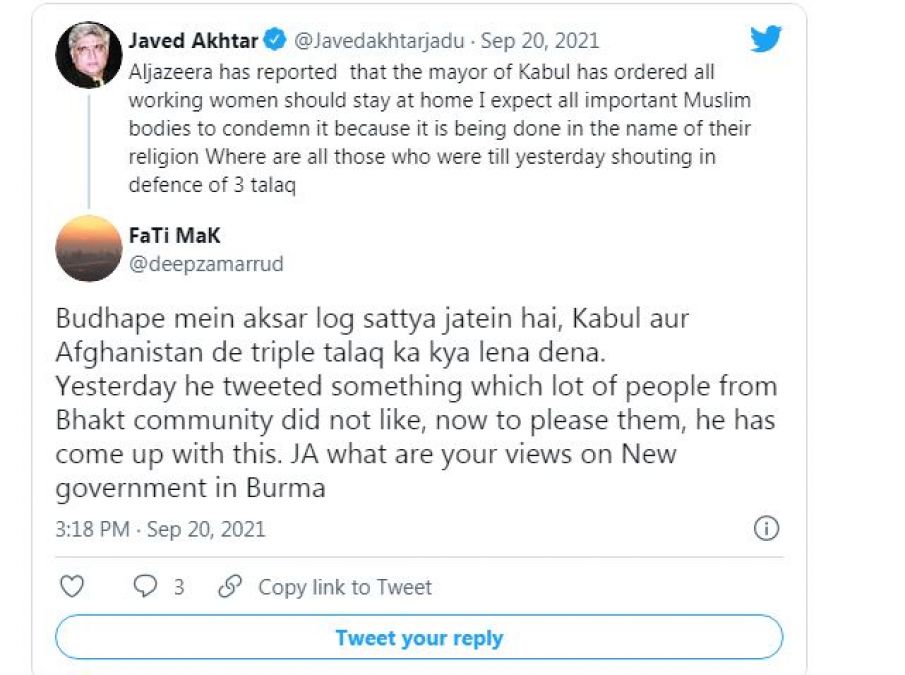 Ahmed commented: “I have never seen a tweet from this infidel about the bombing of the United States and now he is agitated by the news he is planning and looking for the right way for.” Adil Khan commented: “Why don’t you just focus on the issues of women in your country? What should you do from other countries? Please, this is not your job. Saif Alam linked Javed Akhtar to the BJP, he wrote: “Very cleverly, in linking India’s triple talaq problem with the Kabul problem, you are trying to point out that what the BJP has done in the name of the triple talaq is correct and Javed Akhtar is with the BJP. Wow. ‘

Raj Kundra will be released from prison today!

960 crore in the accounts of 2 children, what is the connection between “Sonu Sood” and the case?

The BJP never plays politics based on ...